Following on from my last post on our stay in Verona and Bologna, in this update I will cover our time in picturesque Perugia and nearby Assisi. Leaving Bologna we caught the train South, crossing the Rubicon in the process.

Well I think we did anyway, latitudinally speaking, but let’s not let facts get in the way of a good, clichéd subheading.

Perugia was the one destination on our whistle-stop honeymoon tour of Italy that I knew next to nothing about and had no preconceived notion of. I think that helped me love it all the more. That, and the fact that the greatest dish of our entire stay in Italy was to be found here in Perugia.

Where did we stay? 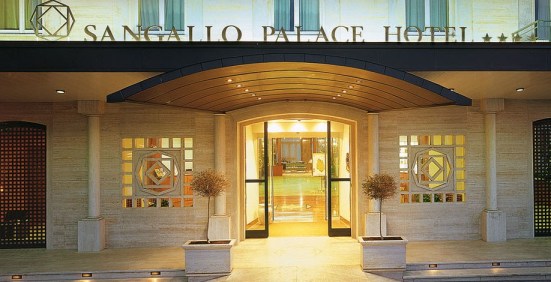 Sangallo Palace Hotel – Great location, 200m from the AMAZING underground escalators, that take you into the town centre – more on this later. Great staff, a comfy room and there’s some great views of the sunset from the hotel.

What did we do?

That which needs to be said of Perugia has already been said, in far more an eloquent manner than I could ever hope to emulate:

“I should perhaps do the reader a service by telling him just how a week at Perugia may be spent. His first care must be to ignore the very dream of haste, walking everywhere very slowly and very much at random, and to impute an esoteric sense to almost anything his eye may happen to encounter. Almost everything in fact lends itself to the historic, the romantic, the aesthetic fallacy – almost everything has an antique queerness and richness that ekes out the reduced state; that of a grim and battered old adventuress, the heroine of many shames and scandals, surviving to an extraordinary age and a considerable penury, but with ancient gifts of princes and other forms of the wages of sin to show, and the most beautiful garden of all the world to sit and doze and count her beads in and remember.” – Henry James, Italian Hours

That really sums it up…I have little else to offer. As with many of the local towns, Perugia – Umbria’s diminutive, but picturesque capital – sits atop a hill, spilling down into a scenic patchwork quilt of verdant fields below. The best way to enjoy it is simply to head out and have a leisurely walk where the mood takes you.

After the hustle and bustle of Verona and Bologna the relative peace and quiet of Perugia was exactly what I was after. The first thing that will hit you are the views, which are absolutely, utterly stunning – this, THIS was the Italy of my imagination incarnate.

One thing you absolutely must do is take the escalators from the lower town (one of which was located just outside our hotel) which lead up through the medieval streets of Rocca Paolina before emerging into the bright sunlight of Piazza Italia.

This is a video of us doing the journey in reverse, late at night, in the rain, after everyone else has gone to bed. How there hasn’t been a horror film set here yet is beyond me. Awesome!

What did we eat?

Umbria, the green heart of Italy, is one of the country’s few landlocked regions and local menus reflect this, focusing on the bounty of the land. Simplicity and a reliance on exceptional seasonal produce – the hallmark of most Italian cooking – were evident here more than perhaps anywhere else we visited.

60 miles south east of Perugia lies Norcia, Italy’s main black truffle producing area and truffles feature heavily in the dishes we tasted, along with excellent Pork and Mushrooms. Perugia is also famed for it’s chocolate, so be sure to try some during your visit.

Da Cesarino – A simple, no frills restaurant located in a prime spot in Piazza IV Novembre, close to the Duomo, specialising in grilled meats. This was one of those evenings where a raging appetite overcame all sense of perspective and we ordered way, way too much food. We started with a selection of local hors d’oeuvres including the ubiquitous torta al testo and chicken liver crostini.

We followed this up with a bowl of Penne alla Norcina – penne pasta with local sausage meat in a rich cream and white wine sauce. This is so easy to make at home and one of my wife’s favourites – I’ll post the recipe soon. 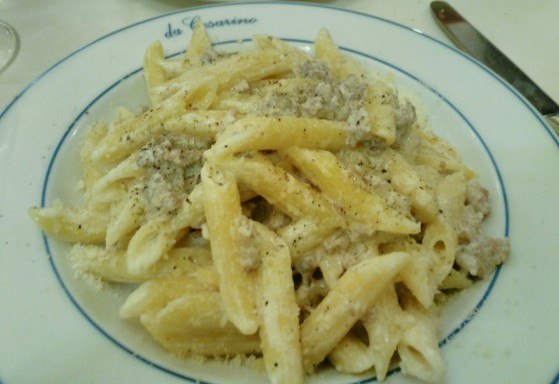 Then we hit the grilled meat section and had some lamb chops (a little disappointing) and Pollo al Diavolo, which was very good.

And yes. We ordered desert. A selection of local cheeses and a Caramel Panna Cotta. Please don’t judge us.

Nothing at Da Cesarino is going to change your life, but it serves good, simple food at a fair price, which is all you can really ask for.

La Taverna – Talking of food that will change your life, if you are in Perugia there is one thing you absolutely have to do. You must pay a visit to La Taverna (booking in advance is recommended), whereupon you will be presented with a complimentary glass of prosecco and a menu – you must not be distracted by such fripperies.

Instead fix the waitress with a steely-eyed stare and request in a firm, yet level tone that you wish to be presented with a plate of Ravioli di tartufo nero al parmigiano with all due haste. You will order a plate each, one plate to share between diners along with other dishes is not enough and will inexorably lead to violence and disharmony. If you have led a good life you will be presented with the humble (and poorly lit) plate of food below; one of the finest things I have ever eaten.

This was cooked by a chef with a perfect understanding of the dark art of emulsifying pasta cooking water, butter and cheese to ecstatic effect, and then still have the generosity of spirit to punch the whole dish through with an obscene quantity of truffle, both in the sauce and freshly shaved at the table. It is simply one of those dishes that you have to eat to understand my hyperbolic reminiscences. I dream carnal dreams of this plate of food.

We ate many other good things too, such as: 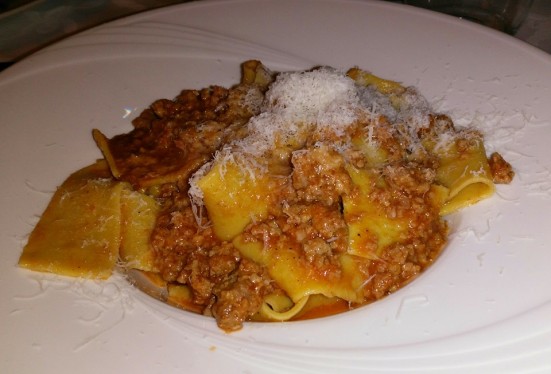 Pappardelle with Umbrian Ragu (not a touch on the Bolognan version, but still good) 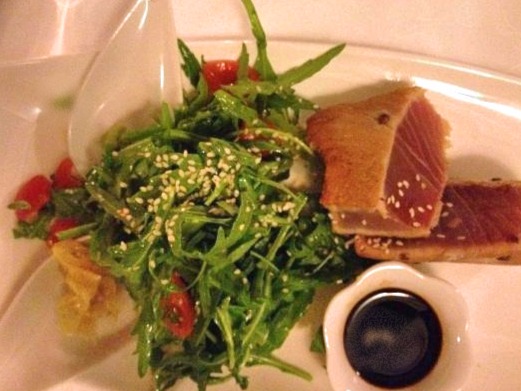 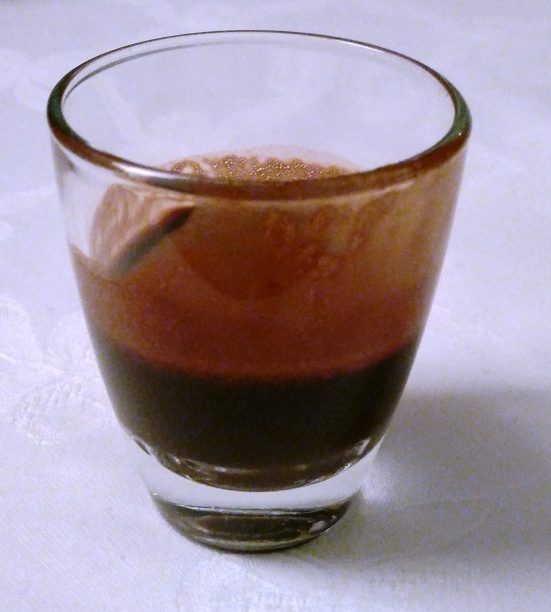 And I should give a special mention to our waitress who was absolutely brilliant but whose name sadly eludes me. But thank you, you were wonderful!

Sandri dal 1860 – La Pasticceria Sandri is a Perugian institution, a quite beautiful patisserie founded by Swiss born Giacomo Schucani in the late 19th century and, I believe, still in ownership of the fifth generation of the family today.

Even if you don’t have a sweet tooth, Sandri is worth visiting for the decor alone, it’s awash with vintage walnut, marble and glass with a spectacular vaulted ceiling painted by a pupil of Brugnoli.

And so ends our time in Perugia, On to Assisi!

We didn’t stay in Assisi, but stopped off for a random day trip and I am so glad we did, it is a quite beautiful town with stunning views, and we got to hang out with Pope Francis!

OK we didn’t meet the pope at all, but by bizarre happenstance he happened to be in town for the same day we randomly turned up along with the leaders of world faiths for the inter-faith ‘Thirst for Peace‘ Summit which happens every 30 years or so. Talk about timing.

What did we do?

A word of warning, like many of the towns in Umbria, Assisi sits atop a hill. And it is a REALLY steep hill! If, like us, you decide to walk from the bottom of the town to the summit you are in for a serious, but enjoyable ascent.

Assisi is absolutely stunning, beautiful – unfortunately because of the religious summit taking place many of it’s major landmarks were heavily policed, ticket only events on the day we visited, so we only got to see some of the major landmarks like the Basilica di San Francesco from a distance.

Instead we spent most of our time wandering the exceptionally well preserved medieval streets soaking in the atmosphere and history and exploring the imposing Rocca Maggiore fortress which overlooks the town, well worth the extra hike. The views over Assisi are picture perfect and the fort itself is fascinating to explore, and incredibly peaceful away from the hubbub in the town below.

If you are visiting Assisi for the day yourself I’d advise having a look at this itinerary, Letizia seems to know her stuff and her recipes are well worth checking out as well.

What did we eat?

We stopped off at a random Pizza place – La Lanterna – whilst we were exploring the labyrinth back streets of Assisi…they were two of the best pizzas we had during our entire stay! 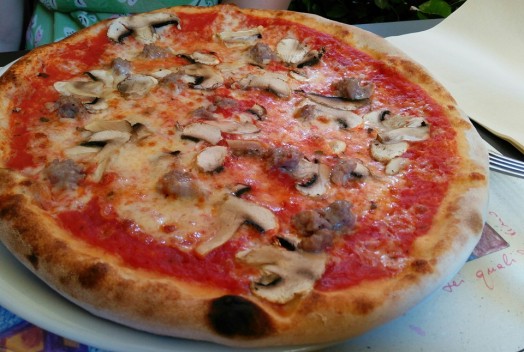 In my next installment we move on to Florence and Sienna and eat seriously good steak and meat dishes! Until next time buon appetito!